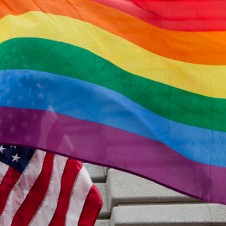 Laurence Hewitt of New York, New York has started a petition on Change.org asking the U.S. Olympic Team to show their support for equal rights by flying the gay pride colors at the opening ceremony in Russia at the 2014 Winter Olympics. Over the past few months, the world has been watching the increasing violence towards the LGBT community in Russia due to the passage of the anti-gay legislation.

“By carrying the Gay Pride flag alongside their country’s flag or wearing the colors on their uniform, athletes at the 2014 Sochi Olympics will be sending a strong message to the Russian government,” says Hewitt in his petition. “The athletes of the world should act with a single voice against this oppression.”