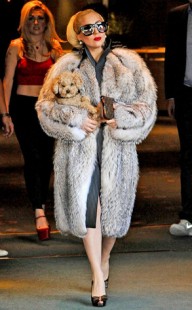 Is Lady Gaga about to meet the fate of Kim Kardashian and get humiliatingly flour-bombed on a red carpet by animal rights activists for wearing fur? It would appear so, unless Gaga’s many gay fans are successful in a campaign launched in recent days to get the performer to explain a series of recent occasions on which she appears to be donning fur coats.

People for the Ethical Treatment of Animals (PETA) is imploring Gaga’s LGBT fans to pressure the performer, who has said in the past, “I hate fur and I don’t wear fur.” Dan Matthews of PETA, who is gay himself, wrote an open letter to Gaga which appeared on the widely-read gay blog Towleroad on Monday, warning her of the consequences if she didn’t offer an explanation, and then spoke out further on Tuesday, again warning Gaga directly that a flour-bombing is in her future.