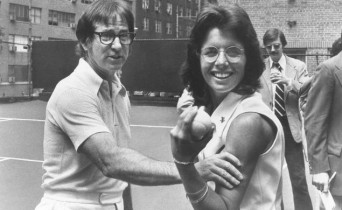 I know nothing about tennis except that it’s thrilling to watch athletes play the sport. I’m in love with love but am clueless about love on the tennis court. As to a match point, well, I’ve always avoided playing with matches. Yet, when Billie Jean King beat Bobby Riggs in the historic “Battle of the Sexes” 40 years ago this month on Sept. 20, 1973, my life, as was the case with so many women (and men), changed.

The PBS program “American Masters: Billie Jean King,” which commemorates the 40th anniversary of the “Battle of the Sexes” as well as King’s iconic impact on both tennis and the culture, premiered last week. The engaging film, a part of the Emmy-winning series “American Masters,” can be viewed on the PBS site. The show highlights King’s founding of the Women’s Tennis Association in 1973, the year when the U.S. Open became the first Grand Slam tournament to award equal prize money to men and women.