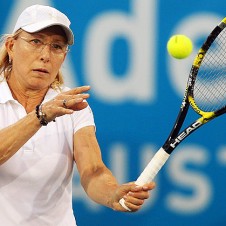 Navratilova, an 18-time Grand Slam singles champion, has been out publicly since 1981. (Photo: Getty)

Tennis champion Martina Navratilova, a pro athlete who has been out for many years, penned a piece for “Sports Illustrated” today on what Jason Collins’ coming out means for the future of LGBT athletes in sports. Navratilova points out that a change in attitude has been helped along by the vocal support of straight, high-profile allies and projects like the You Can Play initiative, which ensures “equality, respect and safety for all athletes, without regard to sexual orientation.”

AfterEllen is the pop culture site that plays for you team.