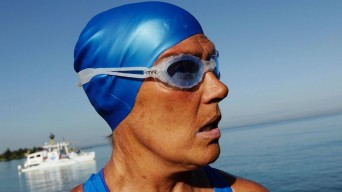 Diana Nyad broke world records this weekend when she swam 102 miles from Cuba to Key West without stopping. When it was finished, she had swam 52 hours and 54 minutes through the Devil’s Triangle without any protective gear or shark cages. The out swimmer emerged from the ocean and spoke to the press and her cheering supporters, saying she had three things she wanted to tell everyone: “One is, we should never ever give up. Two is, you’re never too old to chase your dreams. Three is, it looks like a solitary sport, but it’s a team.”