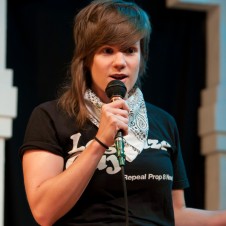 Cameron Esposito is an up-and-coming lesbian comedian who recently made her debut network TV appearance on Craig Ferguson’s “The Late Late Show.”

The stand-up artist had the performance of a lifetime with Jay Leno, an unexpected guest on the show, interrupting the comedian and inviting her to come sit with him and Ferguson. And once she joined them, the duo had a startling — and awesome — declaration for her: white, straight men are on their way out and “lesbians rule,” with Leno claiming that Esposito and her peers are the future of comedy.

The Huffington Post recently caught up with Esposito to discuss her groundbreaking television debut, as well as her own endeavors within the comedic spectrum and the role she expects LGBT comics will play in the push for full equality and inclusion for all LGBT people.