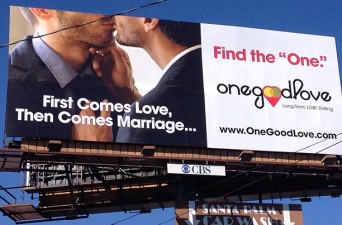 In light of the recent Defense of Marriage Act (DOMA) ruling, OneGoodLove, the Internet’s leading relationship-focused online dating service for lesbian, gay, bisexual, and transgender (LGBT) singles, announced the release of its “Marriage Equality State of the Date Report.” Findings of the report, based on a survey of 875 LGBT singles, suggest that while the Supreme Court ruling on DOMA and California’s Proposition 8 aren’t putting social pressure on gay and lesbian people to immediately “tie the knot,” many gay and lesbian singles are now more likely to consider marriage their ultimate relationship goal because of the court’s recent landmark decisions.

Improved Outlook on Marriage Since the DOMA Ruling

Sixty-three percent of LGBT singles surveyed said they were more likely to think of marriage as their ultimate dating goal now that the Supreme Court has struck down the Defense of Marriage Act (DOMA), with only 35 percent saying that their outlooks have not changed.

Eighty-seven percent of all LGBT singles reported that increases in same-sex marriage rights would not increase the societal pressure on them to settle down and tie the knot.

Thirty-seven percent of all participants said that communication was the most important personal quality they would have to improve to make a future marriage work. Twenty percent said they would have to get their lives in better financial order to marry and live happily ever after.

Only six percent of gay men wanted an “over the top party with everyone they had ever known,” while 18 percent of bisexual and 14 percent of lesbian singles wanted the same. None of the transgender respondents wanted an over the top wedding.

For survey details, and to see the billboard, visit the OneGoodLove blog at: blog.onegoodlove.com