I have a tendency to watch a lot of sports, though mostly men’s, I admit. I want my 12 year old daughter, Jessie, to realize women can play and excel at sports too, so we went to the Seattle Storm game versus the Washington Mystics the other night. I don’t know why Seattleites keep saying we need to bring professional basketball back to town. We do have professional basketball here: the Seattle Storm play at Key Arena.

The Storm started out, and finished, strongly. They looked confident and poised and I’m not sure why they started the game with a 2-3 record. I’m so glad we were able to watch at least one game this season as my favorite WNBA player, Tina Thompson, is retiring at the end of this year. She’s played for 17 years and deserves to take a break but I hope she stays involved with the sport for years to come.

Tina was the first pick of the inaugural WNBA season by the Houston Comets in 1997 and, living in Fort Worth at the time, I made my way down to Houston to watch her and her teammates play. She looked just as good Tuesday night as she did all those years ago. She scored 30 points in her recent win and always seemed to be in the right place at the right time for her many rebounds. I will miss her when she retires. 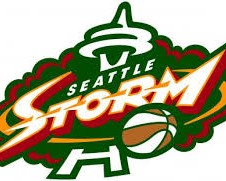 The game ended in a tie and in overtime the Storm finally pulled away enough that the Mystics couldn’t make yet another comeback. I’m glad this was the game Jessie got to see: a fast paced, exciting down to the wire game where the Storm’s perseverance and determination carried them into the win column. I look forward to seeing more games like that night’s: in person and on TV.

The June 28th game versus the New York Liberty is Pride night for the Storm and the announcer made a point to mention this several times last night. I cringed every time he mentioned it because my partner, Janet, and I made a huge mistake a couple of years ago.

Janet and I went to Maui and loved it so much we made plans to go again this year and bring Jessie with us. What we didn’t think about was the timing: we booked a room for the last part of June not realizing that would mess up our Seattle Pride festivities for 2013.  The only consolation? We’ll be in Maui for Seattle Pride. I can celebrate from afar, trust me. I will raise a Mai Tai for you.

June 28th would be a great day to go see a Storm game, embrace our Pride in a welcoming and joyous environment and celebrate Janet and my fifth anniversary. Yes, the June 28th Storm game would have been a perfect opportunity for us if only we had planned a little better.

I think Jessie enjoyed the game; she actually paid attention and asked relative questions which led me to believe she wasn’t just humoring me. She didn’t ask me to leave early, which she always does when I drag her to a baseball game, and seemed content during the game. The only thing she was upset about was the fact the concession stands don’t serve cotton candy among their candy choices. One thing baseball has going for it.

The opportunities Jessie has now, opportunities that weren’t around even twenty years ago, are growing. She can take up a sport, like basketball or soccer, and find herself playing at a professional level long after college. I won’t get into the disparity between the NBA and the WNBA, but we are moving in the right direction. Jessie doesn’t just have a couple of occupations to choose from, in life and in sports, and I look forward to seeing her journey.

The world isn’t perfect, I’m painfully aware of this, but I hope Jessie realizes she can do anything she sets her sights on…the fact she’s a girl should be just another genetic roll of the dice like hair, skin, eye color. If this isn’t enough for her, if she listens to the doubters out there, then I hope she can find solace in Maui. She’s way too young for a Mai Tai, though. I’ll have one for her, too, while I’m at it.

A long time ago I realized I had two choices in life: I could either laugh or cry. I chose to laugh. I share my humorous life with my partner, daughter and Boston terrier in far south Seattle. Two things I do take seriously are family and sports. Let’s talk at www.facebook.com/jj.wallingford or shoot an email to jj.wallingford@yahoo.com.