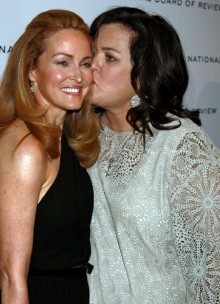 Rosie O’Donnell has tied the knot.

People magazine reports that the 50-year-old O’Donnell tied the knot with fiancee Michelle Rounds in a private June 9 ceremony. O’Donnell’s rep Cindi Berger told the magazine that although they originally had planned to wed in August, they opted to move the ceremony ahead of Rounds’ first surgery since being diagnosed with desmoid tumors, a rare disease that only affects three out of every million people.