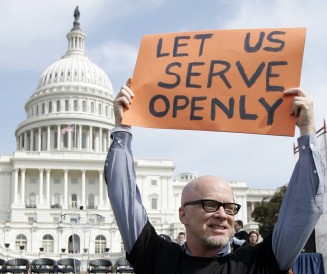 President Obama issued a statement commemorating the anniversary of the end to “Don’t Ask, Don’t Tell” on Thursday, saying the end to the military’s gay ban “upheld the fundamental American values of fairness and equality.”

The day marks a full year since the end of the anti-gay law, which was formally lifted from the books on Sept. 20, 2011.

The full statement from Obama follows:

“A year ago today, we upheld the fundamental American values of fairness and equality by finally and formally repealing “Don’t Ask, Don’t Tell.” Gay and lesbian Americans now no longer need to hide who they love in order to serve the country they love. It is a testament to the professionalism of our men and women in uniform that this change was implemented in an orderly manner, preserving unit cohesion, recruitment, retention and military effectiveness. As Commander in Chief, I’ve seen that our national security has been strengthened because we are no longer denied the skills and talents of those patriotic Americans who happen to be gay or lesbian. The ability of service members to be open and honest about their families and the people they love honors the integrity of the individuals who serve, strengthens the institutions they serve, and is one of the many reasons why our military remains the finest in the world.”