So, I’m here in Tokyo. I tell anyone who asks me that I have two favorite cities. One is Barcelona — for the weather, food (amazing charcuterie), people, architecture, you name it. It is a warm, inviting and beautiful city filled with gorgeous buildings, parks and women. Plus, I speak the language — mostly. The other is Tokyo. Why? It’s not the weather. Each of the three times I have been there, it has been cold (late October, early December, and late February). I’ve yet to make it during the coveted Cherry Blossom season. Then, what? Food? Not as much as Barcelona, recall that I despise sushi. Two things. The people and just how foreign it is.

To a one, the people in Tokyo are absolutely ridiculous. Indeed, the people I have met there, the strangers who have gone out of their way (repeatedly) to help me, make me dislike Americans. We aren’t so friendly in comparison. The people are just so kind, considerate and interested in what you have to say. And service is king. The women are lovely, and the men all seem gay to me — the younger ones at least — and that makes me feel super comfortable. “Gay or European?” really should be “Gay or Japanese?” Oh, and I love the sense of style. Color! Patterns. A Scarf! Socks that are crazy patterns. Bring it. Love it. Plus, any country that is absolutely head over heels in love with Hello Kitty, or Kitty Chan, as she is affectionately called, is more than alright with me.

JUST HOW FOREIGN IT IS

This is kind of hard to explain. The thing about Tokyo is that it is so, so, so NOT America. I mean, it’s not the US, Canada, England or Scotland. Duh, Butch. It’s in Asia. No, I get that. What I mean is that it is the one place that I have been where I felt totally and absolutely out of my element. What do I mean by that? You can’t read the signs. In Italy, France, Portugal, Mexico and many other countries I can decrypt most words enough to figure out “police” versus “pub.” Not so here in Tokyo. If the picture next to the Hiragana word for Shinkansen didn’t let you know it was a train, you would be still searching — and you would miss your train that will absolutely be leaving on time without you. 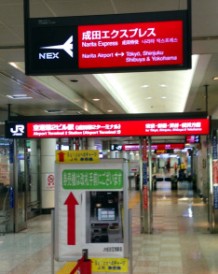 Signs everywhere, but what do they say?

Most people do not speak English (or they might not let on that they do). Money from an ATM? Good luck. Want to use your cell phone? I don’t think so. It is an entire city that is homogeneous. Everyone looks very similar — and no one looks like me. By this, I do not mean to discount the amazing differences between Japanese people. No, not at all. What I mean is that much more than in the US or England, the people have similar coloring.

Now, that is not to say that there aren’t similar minded people there. That there aren’t Butches, lesbians, mothers, democrats, atheists, English speaking people, bow-tie wearing lovers of musicals, operas and craft beers. Of course there are. But more than any other place I have been, the people look similar to each other and they don’t look like me. I am still taller than most, blonder, bigger, and let’s face it whiter, more awkward and more rude. Try as I might not to be any of those last three.

Want me to prove it? When I travel there, with two different companies, I have been given a “handler.” It is so different, so much harder to get around and find your way, that companies assign someone to help you get from point A to point B. And, thank goodness.

So, it is indeed foreign. It is like being in a sea of beautiful Koi — all of whom it seems understand me and are unbelievably kind — and I am a flounder. Also, I am pretty much in love with the culture of respect. There may be other countries, other cultures, that value each other and respect each other the way the Japanese do, but I haven’t found them yet. Evidence the bow. I love this. It is not subservient or menial. It is a strong, self-possessed person giving way by bowing to another. It says, thank you. It says, I am sorry. I says, hello. How about this? When you leave your office at night, you stand near the door and bow to your colleagues saying Osakini Streshimas. Translation? “I am sorry that I am leaving before you.” How great is that? Even the ground crew for my plane leaving Tokyo bowed to the plane/pilot as we rolled away from the gate. It is a way to honor the other person. I freaking love the bow. How weird would it be if I just incorporated this into my everyday life back home in SoCal? I think I just might. Hello, bow. I am sorry that you had a bad day, bow. Thank you for serving me, bow. Sigh. The respect that this imparts is really ridiculous. I had a protracted conversation on my last evening with the younger colleagues about the bow, the significance, the depth of the bow. It was fascinating.

NOTHING IS LOST IN TRANSLATION

Even though I do not speak Japanese, I have learned enough to impress almost everyone I meet. I think this is more of a sign of how difficult (translation: foreign) the Japanese language is for Americans, rather than the strength of what I’ve learned. I would love to learn more. It is a beautiful language. When I listen to my colleagues and friends speak, I catch a word here and there (thank you, I’m sorry, we, I understand, no, yes, beer, please, woman), but it is nothing like when I hear any one speak a Romance language. I catch lots of those words. Again, foreign. Am I getting this across? And, yet, I feel welcome. Comfortable here.

Perhaps it is because I am at a point where I am trying to find difference. Searching for adventure. Seeking out places where I feel uncomfortable. I love it when English is the second language, or even better, not even on the sign. I think this is why I love Tokyo (and the other parts of Japan that I have visited). Maybe I just like being out of my own element. Way, way outside my comfort zone.

Whatever the reason, I don’t feel like anything is lost in translation even when I do not understand a single word of what is being said. It’s butch to be out of your element. Be Butch.

ButchOnTap is written by Butch Jaxon, a fledgling writer who has been a lesbian her whole life. Butch was raised in San Diego and is an accomplished lawyer. She loves to write, play any kind of sport or game, consume any kind of entertainment and is frequently found drinking lattes in a bookstore or discovering new beers at local micro-breweries.