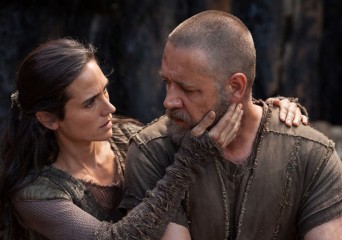 I saw this film on a traditional-sized screen and it would be sure not to disappoint in IMAX. The revolutionary visual effects by Industrial Light & Magic have rocketed the task of film production management into a new direction. 99 percent of the animals in “Noah” were CGI creations. Using CGI instead of real animals was a deliberate decision by the filmmaker, not only as a time management strategy during filming, but also because of Aronofsky’s strong belief in the humane treatment of animals. When commenting on working with live animals in a recent interview with PETA, Aronofsky said, “There’s really no reason to do it anymore because the technology has arrived.” “Noah” clearly proves this statement to be true.

The only thing disappointing about this film is the flood of opposition it has received. Currently Indonesia is the latest country to ban against “Noah.” Other Muslim countries such as the United Arab Emirates, Qatar and Bahrain have all banned the film due to their laws against representing holy figures.

Here in the U.S., Christian Fundamentalist groups are protesting “Noah” saying that the film is not an accurate depiction of the biblical tale. I can’t help but notice that some of these groups are the same organizations that also outspokenly oppose gays and everyone else who isn’t in line with their narrow view of the world. One example of a religious group completely outraged with “Noah” is Faith Driven Consumer, the organization responsible for an ongoing petition to support “Duck Dynasty’s” anti-homosexual points of views.

Another right-wing fundamentalist who took the time to completely bash the film without actually seeing it first is Glenn Beck. Beck is a right-wing commentator for Fox News. When top executives at Paramount discovered Beck’s negative reaction to “Noah” without him actually having seen it they personally invited him to a private screening. After being confronted by Paramount Beck stated on his FOX News show, “I actually felt like a dirtball basing my review on something I hadn’t seen.” Looks like Paramount fed Mr. Glenn Beck a long overdue slice of humble pie.

“Noah” is by the far most creative and inventive interpretation of a biblical story I have ever seen. Overall the visual effects were dramatically stunning and the finely executed lighting in this film makes every frame of it feel real. This film has the perfect combination of suspense, love, action, special effects and great acting.

Grab onto the helm and let “Noah” steer your boat this weekend.