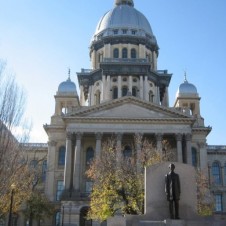 At the close of the legislative session, the Illinois House of Representatives did not call for a floor vote or advance The Religious Freedom and Marriage Fairness Act, the bill that would grant same-sex couples in Illinois the freedom to marry.

“After an overwhelming victory in the Senate, today’s failure by the Illinois House is a disgrace, especially for the thousands of committed same-sex couples who want and deserve to make the ultimate vow before their friends and family and spend the rest of their lives with the person they love, protected and supported by their marriage. Freedom to Marry is proud to be an active partner in Illinois Unites for Marriage, and is grateful for the groups that led the effort on the ground — the ACLU, Equality Illinois and Lambda Legal. We also deeply appreciate the leadership of lead bill sponsors in the House and Senate, Rep. Greg Harris and Sen. Heather Steans. Make no mistake, we will fight and make our case until all Illinois families have the freedom to marry the person they love and until the legislative vote reflects the solid majority of Illinoisans and Americans who stand for treating their neighbors the way they want to be treated.”