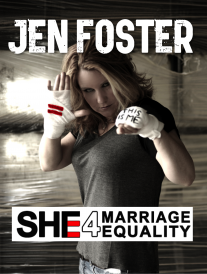 Nicole Conn, the writer/director behind lesbian favorites Claire Of The Moon (1992), Elena Undone (2010) and A Perfect Ending (2012) is directing a Marriage Equality PSA to be released in December. This will be Conn’s first music video.

SHE4MarriageEquality (@She_4_ME) will launch a video clip to a orchestral dance mix of Jen Foster‘s “SHE.”  Foster says, “It started out as a small project and now it has snowballed into this large movement. Everyone who has pitched in to make this PSA come to life has been so genuinely excited to help. It has been a really moving experience.”

Marriage Equality USA (MEUSA), Visit West Hollywood, WOLFE Video, Curve Magazine and Andaz West Hollywood have all signed on as official supporters of the video along with a fleet of volunteers from the LGBT community who have contributed in every aspect of this Music Video PSA.

The video will feature guest appearances by Nicole Pacent (Anyone But Me), Barbara Niven (A Perfect Ending), Traci Dinwiddie (Elena Undone) and more.