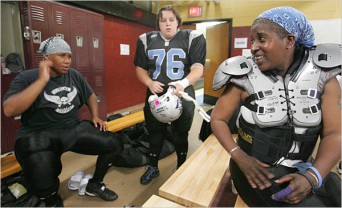 Sharing a field with youth soccer players at the Bushwick Inlet Park in Brooklyn’s Williamsburg neighborhood, the New York Sharks, women’s professional football team are preparing for their June 15 playoff game against the Columbus Comets.

Chatter about a rookie talent show that recently took place at a Mexican restaurant in Manhattan is rampant among the diverse group of football players, as they stretch and dress for practice. Dark clouds hover over them and the near East River, while light rain taps their helmets.