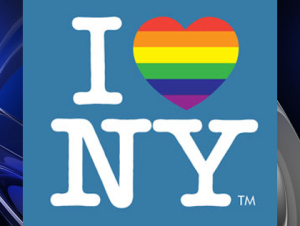 A logo from the New York’s LGBT tourism website (Photo via: lgbt.iloveny.com)

Hands down, New York City is the number one destination for girls and their gay boyfriends, and why not? Who can resist Broadway, fashion, celebrities and models, “Sex and the City” hot spots, and I can go on and on. The Big Apple has it going on.

New York City tends to take a bite out of the Empire State attracting and dazzling visitors ready to drop their pink dollars year after year in the city. Rarely, do these visitors venture beyond its borders. Is there anything beyond the New York City?

Governor Andrew M. Cuomo hopes queer travelers and their friends will begin to ask the question, “Is there more than New York City?” with the new travel website I Love NY LGBT crafted especially for the LGBT traveler.

“New York State has a tremendous variety of ‘must see’ destinations for all travelers of different interests — whether they are wine connoisseurs, history bugs or outdoor adventurers,” says Andrew, stating that the website will be an important tool to attract visitors and encourage spending and job growth throughout the state.

“New York has a proud history of welcoming the LGBT community,” continues Andrew. “Whether you’re planning a weekend trip or a destination wedding, I encourage all to come explore the Empire State.”

“Many LGBT people, both in and out of the state, simply aren’t aware that New York has an I Love Lucy museum, more ski slopes than Colorado, 250 wineries, the site where the women’s rights movement was born, one of the largest outlet shopping centers in the world, an annual festival celebrating the Wizard of Oz, a natural park larger than Yellowstone and the Grand Canyon combined, some of America’s best-rated beaches and so much more,” says Ross.

“Before selecting their next travel destination, we want LGBT people to think of all of the world-class vacation opportunities there are for them right here in New York State,” he continues.

Gay boys and girls spend approximately $70 billion on travel in the U.S. yearly.

Women in general spend nearly $200 million a year in the U.S. on girlfriend getaways, according to an AAA survey in 2007.

The website is a one-stop portal into all that New York has to offer LGBT travelers. The new website welcomes LGBT travelers with the iconic “I Love NY” logo replacing the red heart with a rainbow hear and provides information and suggestions for gay and lesbian’s planning their New York trip.

The easy to navigate website features pages based on interests, such as Arts and Culture, History, Food and Drink, Shopping, Relaxation, Family Fun, Outdoor Adventure and Nightlife. The website highlights regional things to do along with events and resources.

New York legalized same-sex marriage in 2011. The website also offers a wedding guide and tools for same-sex couples to plan a New York wedding. The only problem with the website is that men are prominent and dominate the site, while images of the girls are placed on the fringe, except in the Outdoor Adventures and Family Fun pages. There isn’t a special page just for the girls, but at least it’s a starting point.

The campaign to attract more gay and lesbian travelers is a part of Anthony’s nearly $60 million tourism campaign, the largest in decades for the state.

He unveiled his plan to attract travelers to explore every corner of the Empire State during a tourism summit in Albany last month.

To get into a New York State of mind, visit LGBT.ILoveNY.com.