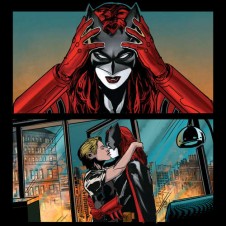 This Wednesday, after one of the most public and bitter creative vs. editorial breakups in comic book history, DC will release Batwoman #25 out into the wild. The GLAAD Award-winning duo of J.H. Williams and W. Haden Blackman — both of whom announced their intention to leave the book after DC refused (among other things) not to let Kate Kane and Maggie Sawyer get gay married — are now officially off the book (before they were able to wrap up the highly anticipated Batman vs. Batman story arc), and openly gay writer Marc Andreyko has taken the reins of the series. In his interview with “USA Today,” Andreyko acknowledges that he’s got big shoes to fill, that he doesn’t have any plans to make huge changes to the character, and that he knows how much she means to the LGBT community.