Wednesday wasn’t easy as I watched tons of Facebook comments coming through my newsfeed from friends, colleagues, former cohorts and acquaintances spew hatred for my family. My lesbian, gay, bisexual, transgender and queer community. We love our family fiercely, and it hurts to see so many verbally attack us based on lies spread by Mike Huckabee and his constituents.

We’ve long known that Chick-fil-A is a Christian-based company. That’s joyous and wonderful. And who doesn’t support free speech? I certainly do. But the issue, the one Mr. Huckabee doesn’t want his followers to think about, is the simple fact that Chick-fil-A continues to give a generous amount of its profits (current tab is at $5 million) to hate organizations such as Family Research Council and Exodus International that work directly against marriage equality. These organizations are run by people who deliberately try to make sure that my wife and I remain second-class citizens in the United States of America. 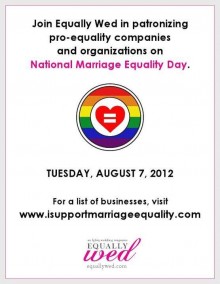 Kirsten Palladino is the co-founder and editor-in-chief of EquallyWed.com. Photo of Kirsten provided courtesy of Entwined Studio.