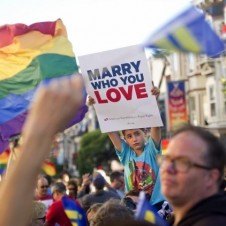 Secretary of Homeland Security Janet Napolitano affirmed in a statement on Monday that marriage-based green card applications for gay bi-national couples will be treated just the same as they are for straight couples in the wake of the Supreme Court ruling against the Defense of Marriage Act.

“After last week’s decision by the Supreme Court holding that Section 3 of the Defense of Marriage Act (DOMA) is unconstitutional, President Obama directed federal departments to ensure the decision and its implication for federal benefits for same-sex legally married couples are implemented swiftly and smoothly,” Napolitano said. “To that end, effective immediately, I have directed U.S. Citizenship and Immigration Services (USCIS) to review immigration visa petitions filed on behalf of a same-sex spouse in the same manner as those filed on behalf of an opposite-sex spouse.”