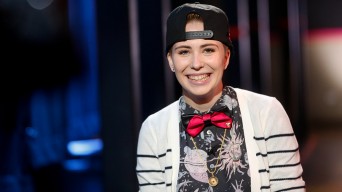 After hurriedly conferring with the band after being told she’d received the fewest votes for the week, the openly lesbian singer from San Francisco reprised her “Rush Week” performance of John Legend’s “All of Me” in an attempt to sway the judges to use their single save for the season. Despite what appeared to be an emphatic plea from an emotional Jennifer Lopez, the three judges could not reach the unanimous decision necessary to keep the young singer in the competition.

With fellow judges Lopez and Keith Urban looking on, Harry Connick, Jr., delivered the news to an anxious Nobilette.

Fans can look for Nobilette on the “American Idol” tour this summer which will feature the Top 10 finalists from the season.

Watch Nobilette’s “Rush Week” performance of “All of Me” here.