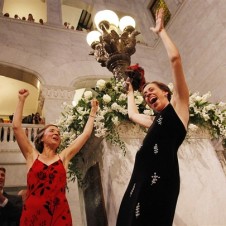 Minneapolis’ Mayor R.T. Rybak took a trip to Chicago to steal all their gays. Rybak’s office has cooked up a new ad campaign, “I Want to Marry You in Minneapolis,” encouraging Illinois residents to make the short trip across the state border to get hitched. This year, Minnesota became the thirteenth US state to legalize same-sex marriage, and Mayor Rybak presided over the wedding of Minneapolis police chief Janeé Harteau just a few weeks ago. Rather than call a press conference in his own town, Rybak bounced over to Chicago to unveil the campaign in Rahm Emanuel’s own backyard.

“Chicago is my kind of town, but it’s a second city in human rights,” Rybak told reporters. “I hope the day comes [when] all Illinoisans can marry—but until that day comes, I’m here to steal your business.” Ouch. A March study by UCLA’s Williams Institute estimated that Illinois’ economy could pick up an extra $100 million (which would yield about $8.5 million in tax revenues for the cash-strapped state) if same-sex marriage became the law of the land.