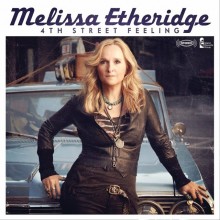 Listening to Melissa Etheridge’s “4th Street Feeling,” released last week on her home label for 24 years, Island Records, one might agree with the dynamite rock legend’s own description of the sound as “organic.”

After adopting a more pop, adult contemporary sound in the middle of the last decade for singles like her cover of Greenwheel’s “Breathe,” the Oscar and two-time Grammy winning icon has returned to a nostalgic country blues sound that would flow well into a playlist with other artists she says she once played on her Chevy Impala’s 8-track in the ‘70s while driving the strip the album was named for in her hometown of Leavenworth, Kan.

Breaking barriers first by coming out in the early ‘90s and then rocking a Janis Joplin tribute live at the Grammys, bald from radiation and chemotherapy during breast cancer treatment, Etheridge returns to where she was born and raised for her eclectic 11th studio album, while experimenting with some new elements as well — like the banjitar featured in the first single “Falling Up.”