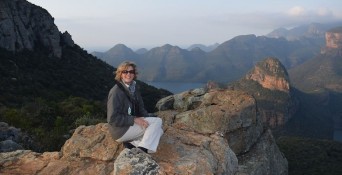 It’s inspiring to watch someone follow their dreams. When they follow them up one of the world’s tallest mountains to raise money for marriage equality and anti-bullying programs, then move to another continent to chase them further, it’s awe-inspiring.

That’s Jody Cole. This unstoppable southern belle from Georgia — we’re talking big-dress-coming-out-party-bonafide southern belle — has been bucking tradition and using her antebellum wiles to lure travelers to Africa for over a decade.

She first set foot in Africa in 1998 as a 36-year-old philanthropist and concert promoter. She fell head over heels in love. She pursued her new love vigorously, returning again and again to become a certified Field Guide and Trails Guide with the Field Guides Association of South Africa as well as training with the Kenyan Professional Guides Association. Additionally, she earned Adventure Travel Specialist and a Master KATS (Kenya Authorized Travel Specialist) certifications.

In 2004, Jody launched Wild Rainbow African Safaris, a business that ensured she would be able to revisit her passion and continue her education. As she celebrates the 10th year of Wild Rainbow, she took another big leap. She moved to Africa to study and guide full time in May.

When I joined Jody for a Kenyan Safari in 2010, our group laughed harder than the hyenas we were watching. In fact, we frequently fell behind on our game drives because our vehicle had to stop until the laughter did, so we wouldn’t scare the animals, who were taking note of our shenanigans.

Jody’s passion and curiosity are infectious as are her laughter and joie de vivre. She’s happy as an elephant rolling in the mud when she’s on safari. Trust me, elephants are crazy happy when they roll in mud.

Not only did Jody share the incredible flora and fauna with us, she connected us with the culture. We shared a long dinner with local lesbians in Nairobi. Wow, that’s a scary place to be a lesbian. Coming to our dinner was an act of bravery in itself. 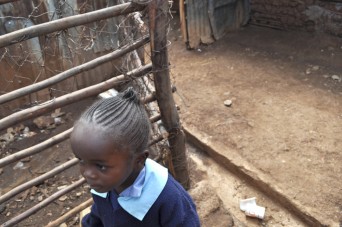 We visited with the children at the St. Lazarus School in Kibera, Africa’s largest slum. The school appeared to be sculpted from the surrounding trash and mud. The children sat elbow-to-elbow at long tables made of wood in various states of decomposition under a ceiling made of overlapping hunks of metal and plastic with openings to let in the light. Yet despite the crushing poverty, the teachers and students were some of the happiest people I’ve met. While it felt good to leave the children clothing, school and medical supplies and money, what they gave me was more valuable: A clear illustration that things aren’t the key to happiness and attitude is everything. 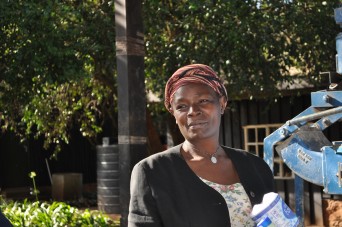 Jody shared the Kazuri Bead Factory with us, where a staff of mostly single mothers hand make beads for a good wage. The factory provides many health care services to its employees, including sending them home with toilet paper, toothbrushes, soap and other hygiene supplies. Kenya isn’t the most hospitable place for women. The success of the bead factory at making social change into a profitable enterprise was truly an inspiration. 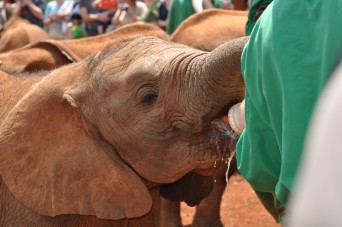 At the Sheldrick Elephant Orphanage, we saw first hand the sadness of these adorable pachyderms living without their families and the extraordinary care they are given. Seeing the orphan elephants at the start of our journey was an important contrast to the elephants we saw on safari. I was not the only one completely charmed by the elephants. The joy they take in their families is palpable. It underscored the tragedy behind the ivory trade.

Those are the kind of up-close and life-changing experiences Jody provides. She doesn’t do cookie cutter safaris. She tailors her itineraries for each group because what’s going to touch my heart isn’t the same as what’s going to touch another person’s heart. That’s Jody’s mission: To take people into the heart of Africa.

From a canoe trek in Zimbabwe to wine tasting in South Africa, Jody’s adventures are a varied as her clientele.

In 2015, Jody plans to summit Mt. Kilimanjaro, the world’s tallest free-standing mountain at over 19,000 feet, for the third time. She did it in 1998 and 2010 to raise money for Equality California and anti-bullying efforts.

In addition to working with numerous non-profit organizations in Africa to improve human rights and animal welfare, Jody has spent two decades as a philanthropist and organizer in the United States working on much the same kinds of causes. She’s earned countless accolades for her work, but that’s not at all why she does it. She does it because it needs to be done.

That’s why Jody Cole is an unstoppable force for good in the universe.