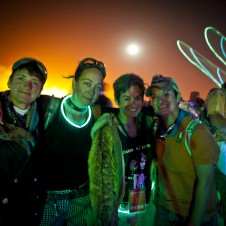 Most of us have heard about Burning Man, a gathering and temporary city, an experiment in art, community, self-exploration and self-reliance. Friends come back deeply changed by their week in Nevada’s Black Rock Desert where Burning Man is held. Sometimes, it even seems they need a bit of a re-adjustment to the “default world,” or the world outside of Burning Man and that much of their year is focused on their return to Black Rock City.

Participants in Burning Man are committed to both the pillars of its philosophy and the experience itself. One of the many things these “burners” appreciate about the temporary, intentional community are the numerous theme camps that cater to and incorporate many different interests and lifestyles — and one of those camps is what Ana Grillo, a veteran of Burning Man, and Beth Nelsen, a total newbie, have come together to explore in their new documentary, “Meet the Beavers.”  Described as “one of the biggest sexual playpens in the world,” Camp Beaverton is Black Rock City’s welcoming home for the lesbian, bisexual, trans*, queer, questioning and heteroflexible women among the 50,000 plus participants in Burning Man.

Camp Beaverton is a trans* inclusive, all women, sex positive camp that boasts massively popular events, sex-ed workshops and a safe-haven environment that allows all kinds of women to explore all kinds of queer. Grillo, an independent filmmaker and award winning photographer, and Nelsen, an indie documentary filmmaker, take a look at Camp Beaverton and this segment of the radical social arts festival through fresh eyes as they introduce us to the Beavers and showcase what makes the camp so very special.

Grillo and Nelsen have started an IndieGoGo campaign to help fund the completion of the film. It’s in its final hours, so contribute now or learn more about the film at MeetTheBeavers.com

Meet The Beavers is an official selection at the Frameline37 Film Festival in San Francisco. Like Meet the Beavers on Facebook or view the official trailers to learn more.