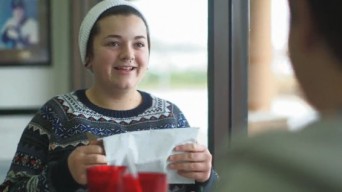 “Generation Cryo,” is a new reality show that follows 17-year-old Breeanna as she searches for the sperm donor her lesbian moms used to conceive her, meeting many newly discovered half-siblings along the way. Her search isn’t meant to replace either of her moms (who are now separated), but rather to fulfill Breanna’s personal curiosity about everything and everyone that’s part of her existence. In most reality shows, it can be hard to discern how much “reality” is actually involved, but having watched the first two episodes, this one appears legit. Breeanna is genuine and funny (and a lesbian herself), and it’s not the invisible sperm donor that’s really the compelling part of the story, but the relationships she makes with her siblings, and prompt discussion on what makes a family.

Read the interview at AfterEllen.com