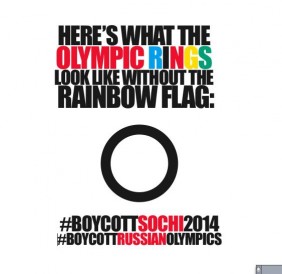 Many are calling for an international protest of the 2014 Sochi Olympics in light of Russia’s current laws impacting the LGBTQ community.

Today, prominent LGBT advocacy organization All Out will deliver the culminating results of an international effort to condemn anti-LGBT legislation and sentiment in Russia to the International Olympic Committee (IOC). A petition containing 300,000 signatures from All Out members, thousands frommembers of Athlete Ally, and a letter from actor Stephen Fry will accompany the symbolic gesture to pressure the IOC to take action.

In an effort to articulate what the large-scale response is calling for, Anastasia Smirnova of the Russian LGBT Network in St Petersburg stated, “We hope the International Olympic Committee responds to All Out’s members and the millions of people worldwide who want Russia to treat all of their citizens with dignity under the law…Unless the anti-gay laws are repealed now, after Sochi Russians will be left with a government ready to punish people simply because of who they are or who they love. We continue our call for world leaders […], to speak out now before it is too late.”