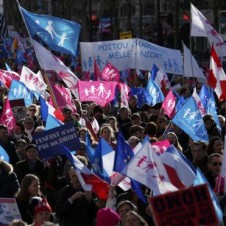 People march in ”La Manif pour Tous” (Demonstration for All) against France’s legalization of same-sex marriage. Visible signs read “a child is not a right.”
(Photo: Reuters/Benoit Tessier)

On Sunday, February 2, over 100,000 protesters gathered in Paris and Lyon to accuse the government of “family-phobia,” due to recent planned policies to introduce gender equality lessons in schools as well as the recent legalization of same-sex marriage.