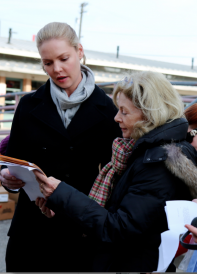 Mary Agnes Donoghue is a screenwriter, playwright, director and producer with seven movies under her belt, including the memorable “Beaches” and “White Oleander.” Her latest project is “Jenny’s Wedding,” for which she’ll have screenwriter, director and co-producer credits.

The much-anticipated “Jenny’s Wedding,” tells the story of the title character, played by Katherine Heigl, as she comes out as a lesbian to her very traditional family and plans her wedding in a typical Middle American small town. The movie is currently finishing up in post-production and is expected to have a fall release in the theaters.

The filmmakers have launched an Indiegogo campaign to raise money to obtain publishing rights to the music to be used on the film’s soundtrack. With 17 days left in the campaign, we chatted with Donoghue about her inspiration for the film, why the theme of personal courage resonates deeply throughout the picture and her decision not to vilify Jenny’s conventional, Middle American family.

What inspired you to write “Jenny’s Wedding?”

It’s a fictional story, but I was inspired by my niece coming out. Jenny, the real Jenny (I used her real name), was completely at ease with being gay. She came out when she was younger, although she didn’t tell the rest of her family. I think her siblings knew, but no one else. What inspired me is that my sister is a very conventional person, and I was stunned when Jenny wanted to get married, and the distance they went to; they never denied her. There was never a rupture between her parents and Jenny, but I suspected what went on behind the scenes for them as people, and I was impressed by it. I was impressed by the lengths they went to, and it was huge.

It’s the thing that moves me most in life. I’m endlessly fascinated by people walking by in super markets. It’s not just about a soldier going out. It’s suddenly seeing what it takes for people to lead a good life, and it’s not easy.

How does the theme of personal courage come through in “Jenny’s Wedding?”

I think it comes through for everyone actually. I just feel like people who live in, particularly the south, live in such a conventional world. And there are people who don’t like change. They’re not accustomed to it. Their world is small, comfortable; they like it. They’re at ease in it. They have an order in which they expect life to take place and evolve, and [in the film] they have to come up against their own limitations. I think these are people who never expected to be tested. And then their values are tested. Their values are tested profoundly.

Do you consider Jenny’s family homophobic?

They’re not homophobes. They just live in this world where that isn’t part of their lives. It’s not part of their world. I think it’s less about people being disapproving, [and more about being] unsophisticated and inexperienced and leading lives where there’s very little change. And I think that’s part of it. It’s just a fear of change. And I think that’s part of the reason why people don’t like change — when things do change you are tested. You’re tested on every level.

[As a writer,] you really try to get inside of who these people are. There’s this line in a scene that takes place in the garage; it took me about three years to write it. He [Jenny’s dad] says, “If you tell them, you’ll hurt your mother.” Jenny replies, “And if I don’t, I’ll hurt me. What would you do?” I had a million elaborate things for him to say and I just went deeper and deeper into this. Who is this person? And his line is, “I don’t know.” And it’s that simple. These people are at a loss. You try to get into the truth of the people, and the character.

On your Indiegogo campaign site, you describe “Jenny’s Wedding” as a road map for families with LGBT children. How so?

It really is that journey as a family and the things we all hold back from each other. The things we reveal or don’t reveal. In this case, it’s a big thing. When Jenny does come out — and the ensuing events — it’s a major moment of truth for everybody. For all of them, and a confrontation about who you are and who you want to be.

Would you like to support this film? You can help by spreading the word or participating in their Indiegogo campaign. A portion of all contributions will be donated to PFLAG Cleveland, a non-profit that works with families and friends of LGBT people to provide them resources on how to best support their children. By donating to their campaign not only will you be contributing to the making of the film, you’ll be eligible for cool perks like digital downloads of the film, props from the set or screenings with the cast and crew. All donations are tax deductible as a result of their partnership with From the Heart Productions.