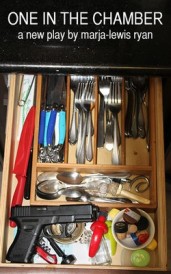 “I am not interested in politicizing the gun rights issue,” Ryan explains. “I am drawn to the exploration of family dynamics under various circumstances.”

Ryan is no stranger to theatrical family dysfunction. Her first play Dysnomia, which also debuted at The Lounge Theater, centers on a suburban housewife and mother of two who comes out of the closet (Ovation Nomination for Playwriting, Critics Pick in Backstage, “GO” from LA Weekly, and Recommended by The LA Times).

Emily Peck starred in the indie hit The Four-Faced Liar and in 10×20 Off-Broadway at The Atlantic Theater Company. Robert Bella has worked on over 100 plays for the stage and radio as an actor, producer, director and writer. He is also a founding member of The Atlantic Theater Company in NYC. Heidi Sulzman’s select credits include Ryan’s “Dysnomia,” “Bones” and “The Waitress.”

One in the Chamber opens on July 12 and continues on Fridays and Saturdays at 8pm and Sundays at 7pm through August 18. There will be one preview performance on Friday, July 11 at 8pm. General admission is $25 except preview, which is $10. The Lounge Theater is located at 6201 Santa Monica Blvd., Los Angeles, CA 90038. For information and to purchase tickets, go to www.plays411.com/chamber or call 324-960-7724.