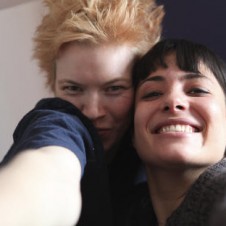 When filmmakers and partners, Dominique Cardona and Laurie Colbert, began to notice an influx of what seemed to be lesbian nannies popping up in their Toronto neighborhood, they quickly became intrigued. After asking around, they learned that the employers actually preferred lesbians because they did not bring men back to their homes. Being directors of films like, “Thank God I’m a Lesbian” and a favorite of any women’s studies course, “My Feminism”, they were understandably fascinated by this phenomenon and the stories of these women and decided to turn the idea into a film. Though the main character is a lesbian, the Canadian directors found it important to not make that a major plot point.

Nicola Correia Damude, who plays the part of Margarita, said, “[We need to be] telling people’s stories [and] not constantly differentiating. It’s the same with race as well. It’s always a Black film or Latino film or gay film. I think we’ll have really gotten somewhere when we start writing stories about people[…]. When an LGBT character can play any lead, when a person of color or any other ethnicity can play any lead and not have it be a focus.”