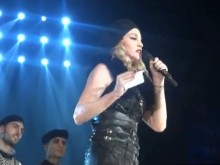 Speculation has been high regarding Madonna’s tour dates in Moscow and St. Petersburg this week. She was expected to speak up for gay rights as well as the release of the punk protest band Pussy Riot, three members of which are currently on trial for hooliganism. She delivered on both counts, riling up support for the causes in a country that has seen diminishing civil rights over the course of the year.

On Tuesday, Madonna announced to adoring fans that she has prayed for the release of the three jailed members of Pussy Riot. Her voice joins those of many other celebrities around the world who have called for their release. They stand on trial for performing an anti-Putin prayer in a Moscow cathedral in February. She wore a balaclava and sported the band’s name on her back, Rolling Stone reports.