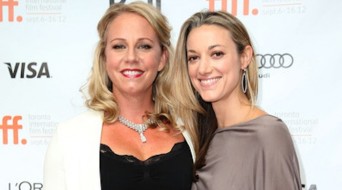 The actress who plays sexy lesbian Dr. Lauren Lewis on “Lost Girl,” Zoie Palmer, apparently came out at the 2014 Canadian Screen Awards as she thanked her partner Alex Lalonde and their son Luca. She also won the fan’s choice award.

Palmer plays the on-again-off-again love interest of succubus Bo, played by Anna Silk, on the popular show, which was renewed for a fifth season. Time for a Netflix bender, ladies!

Watch her coming out as she announces the winner of Best Comedy Series with castmate Silk.