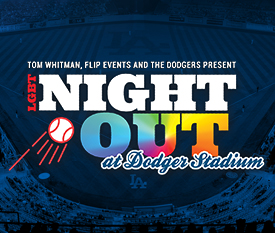 The Los Angeles Dodgers will make history on September 27 when they host the first ever LGBT Night Out. The baseball game will start off with the National Anthem sung by Amber Riley from Glee and the Gay Men’s Chorus of Los Angeles. The First Pitch will be thrown by the only living former MLB player to publicly come out as gay, former Lost Angeles Dodger Billy Bean. Out celebrities like Lance Bass will be in attendance.

The Los Angeles Times noted that the announcement “never actually explained that LGBT stands for lesbian, bisexual and transgender,” but clearly officials have “come a long ways from when they kicked out a lesbian couple for kissing at the Dodger Stadium game in 2000,” according to Advocate.