By Mary Zegarski
special to Lesbian.com 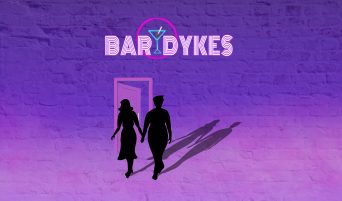 In the early 1980s, Merril Mushroom wrote BAR DYKES, a one act play about the gay bar culture of the 1950s. A longtime resident of Dowelltown, Tennessee, Merril has a rich, influential herstory as a prolific writer and a “back to the land” lesbian, both locally within her neighborhood and the larger world. The area where she has lived the last forty years has an extensive history of collective land projects established specifically for gays/queers/gender nonconforming people. Merril is an iconic fixture with her sharp wit and casual no nonsense attitude. A respected elder, she is an inspiration to many, both residents of Tennessee and its yearly visitors. While influenced by the radical culture of the 1960s/1970s, Merril and her work remain a timeless and formidable force to be reckoned with.

This summer of Stonewall 50 and World Pride, The Other Side Of Silence (TOSOS), NYC’s oldest and longest-producing LGTBQ+ theater company, continues to honor our community’s history by bringing Merril Mushroom’s long-lost play, BAR DYKES, for it’s premiere on the NYC stage.

The audience steps behind a nondescript door where it’ll find a very distinct clientele and world of butches and femmes. Playwright Mushroom, drawing on her experiences as a lesbian in the Deep South and New York City in the pre-Stonewall era, transports us into the hidden subculture of lesbian society in mid-century America, and into the women and their relationships in a precarious time.

Follow 11 bar dykes as they drink, dance, date, duke it out, and grab a few undisturbed moments. BAR DYKESwill be an immersive staging so the audience can experience and eavesdrop on a girls’ night out captured in time as it once was.

This production seeks to preserve not only the cultural legacy of Merril’s work but share her herstory with a larger audience. Contemporary conversations surrounding queerness and gender nonconformity have made massive strides towards breaking down ignorance, intolerance, and hate. These advancements have been wrought with persecution, police brutality, and death.

This play doesn’t only celebrate the life and work of Merril Mushroom but also honors those who have fought to live freely, love whom they want, and make the world a safer, more accepting, and interesting place. TOSOS is proud to produce this amazing work, and honor its author, her life, and vision. We recognize there is still a long way to go—Bar Dykes offers new perspectives on our past, acting as a catalyst for progression into the future.

Merril Mushroom came out in the fifties as a bar dyke. Her writing has appeared over the years in a wide variety of anthologies and periodicals. Her stories about the fifties’ bar scene in Florida were first published in Common Lives/Lesbian Lives magazine, and she was a frequent contributor to early issues of Maize magazine. Her out-of-print lesbian sci-fi novel, Daughters of Khaton, is looking for a new home. She lives on a rural Tennessee hill farm and is grateful for her gardens, friends, families, and her activist life. She is a member of Womonwrites, OLOC, and several rural grassroots organizations.
She is still the butch.

TOSOS (The Other Side of Silence) is New York City’s oldest and longest producing professional LGBTQ+ theater company. In 1974, Off-Off Broadway veteran Doric Wilson (1939-2011), cabaret star Billy Blackwell and director Peter dell Valle, started the first professional gay theatre company in NYC. It was called The Other Side of Silence; TOSOS for short. In 2002, directors Mark Finley and Barry Childs and playwright Wilson resurrected TOSOS. The company has produced over 30 mainstage shows and so many readings of new plays and works in progress we have trouble counting them all. http://www.tososnyc.org