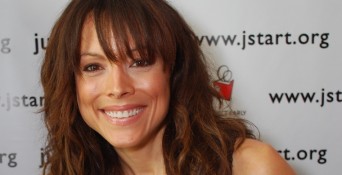 In 2004, network TV considered airing a pilot that revolved around two female detectives, and lovers, in a post-Katrina, New Orleans landscape. It didn’t get picked up, but the pilot did get leaked onto YouTube and amassed a large queer following. Ten years later, Nancylee Myatt, the creator of “South of Nowhere,” Liz Vassy (“CSI”) and Christina Cox (“Defying Gravity”) reunited with the help of “Nikki and Nora” fans through Indiegogo, giving Nikki and Nora new life through the web series world.

In the web series, Nikki and Nora have left the New Orleans Police Department as detectives and started their own home-based private investigation business, helping New Orleans citizens find the truth during work hours, and remodeling their newly bought 150-year-old home during off hours while exchanging good-humored banter.

We got to chat with Liz Vassey (Nikki) about her chemistry with co-star Christina Cox and creator Nancylee Myatt, as well as the lack of lesbian programming and frogs.

How did it feel to have “Nikki and Nora” come to life as a web series after ten years since its inception?

Honestly, it didn’t even feel like [10 years]. There’s this theory. It’s so odd (laughter). There’s this theory that if you put a frog in water, you slowly turn the heat up, and all of a sudden the frog is like, “Oh my god! The water is boiling!” It happens so so subtly that they don’t even notice. I mean, I have such a co-dependent relationship with Nancylee and with Christina, and with the entire team involved with this. It didn’t even feel like 10 years went by. It’s suddenly like, well, of course, we’re doing a web series because we are ridiculously attached to each other.

What do you mean when you say you have a co-dependent relationship with Christina and Nancylee?

You shoot a pilot usually and you never speak to the people again. I’ve shot series and never spoken to people again. We’re gypsies in this business. You meet each other. You get along famously for two weeks, maybe even two years, then suddenly you’re like, “Oh my god, I haven’t spoke to so in so in like a decade.” And it just hasn’t been that way with me and Christina and with Nancylee.

Also, a lot of stuff has happened personally over the last 10 years, as things do, and things bring you closer together. I look at these two women, and they are fabulous and smart and funny and interesting, and you know, I’m not dumb, so I keep them both in my life.

In a business where the norm is never speaking to your coworkers again, what made Christina and Nancylee different?

It’s funny. I was getting married, buying a house with my soon-to-be husband, and some personal stuff was going on, and moving to New Orleans potentially for five to seven years if this series went was really not on the table.

Then I read the script, and I was like, “Oh, shit.” I really like it. So they [casting] says, “OK, we just want you to come in and do a chemistry read at the network. We’re pretty sure you’ll get this, but you have to do a chemistry read with our choice for Nora.”

I talked to the guy who was going to be my husband. I was like, all right, this is New Orleans, and maybe we’re going to have to be quasi bi-coastal, and we’ll figure out a way to do this. I got through the network test, and I called my agents before I walked in and I was like, “OK, but just so you know, if I don’t like this girl, then I don’t want to do this. I don’t want to be in a show that’s carried by two women if we don’t get along and I’ll let you know, but I’ll leave this test if we don’t get along.” And they were like, “OK.” So I walk in, I literally met Christina for two seconds, called my agent and was like, “I’m totally into doing this! She is great (laughter).” We just got along. I believe in alchemy. Sometimes people just meet and there’s chemistry.

And Nancylee and I, I think we hit it off because she asked me — and this is 2004 mind you, lesbians were more underrepresented in television than they are now — she goes, “Well, how do you feel about playing a lesbian?” And I was like, “I have zero issues with it whatsoever. I just think this is a police officer who is in love with somebody who happens to be a woman, and I’m going to play it that way.” And she told me stories about people coming in trying to play it like a lesbian (laughter), and I was like, “What the hell does that even mean (laughter)? Play it like a lesbian? What, do I play it like a straight? It doesn’t make any sense to me.” So we kind of just hit it off because we’re very much on the same page, you know, politically, and we made each other laugh. We remained close. She’s a very, very dear friend.

What kind of responses have you gotten from your fans?

I’ve been hit with a lot of people who are grateful for “Nikki and Nora,” which I find flattering and sad. I think the fact that I’m being approached by people on the street who are saying, “Finally I get to see me portrayed. I get to see a version of me.” It’s flattering that they like the work, but like politically and morally, it means so much to me because I feel like, not to get too precious about it, but I feel like I get to be a part of something that enables people to see versions of themselves on screen, which means a lot. They should get that. Everybody should get that.

How does it feel to know that your fans brought “Nikki and Nora” to life as a web series through Indiegogo?

I think it’s great. To be perfectly honest, I also think it’s a sign that there’s not enough of this product out there. I think that the lesbian community is so sorely underrepresented in television these days. For people to have to watch a 10-year-old pilot online, I mean, for god’s sake, make some shows (laughter). I applaud “The Fosters.” I applaud ABC Family. I think it’s terrific, and those two actresses are fantastic, and I just think it’s about damn time.

Do we have a “Nikki and Nora” season two to look forward to?

I know that Nancylee is hoping that we’re going to shop it around and see what people think. I’m sure there’s a little parcel of land out there for us somewhere where this can keep on getting produced. We have really gracious fans, really supportive fans as is evident by the fact that they helped us raise the money. I think it will have a life somewhere again, and I think when people get along and genuinely love each other as much as we do as a group, I think people enjoy watching that. You can tell the difference. I tend to think things happen the way they’re supposed to, and I think the show has stuck around in some capacity for 10 years, so I see no reason why it shouldn’t keep going.