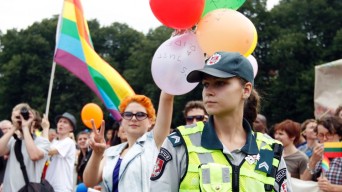 Three years in the making, Lithuania’s second-ever gay pride parade encountered the sadly predictable mob of angry protestors in the Baltic nation’s capital city of Vilnius on July 27. Twenty-eight of the agitators ended up arrested, including anti-gay politician Petras Grazulis, according to the Associated Press. Several other political figures, including Birgitta Ohlsson, Sweden’s European Union Affairs Minister, were pelted with eggs while speaking onstage in the parade’s concert area, but it’s easier to change clothes than to get out of jail, so that adds up to something of a victory for Lithuanian parade-goers.

Lithuanians held their first gay pride celebration in 2010, overcoming an initial court order attempting to bar the event from happening. Judges relented and the show went on in Vilnius, though the affair was relegated to an out-of-the-way riverbank. Apparently it wasn’t quite far enough out of the way, however, because protestors wielding rocks and smoke bombs still managed to find it, and it resulted in nineteen arrests.