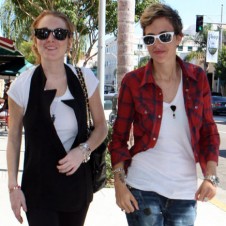 Lindsay Lohan was at the height of her acting career in the mid-2000s when she began a relationship with DJ Samantha Ronson. Although it was only speculated for some time, Lindsay first confirmed their romance in September 2008 while a guest on the radio show Loveline. And even though it was only six years ago, this was huge news. Though the relationship did not work out, Lindsay has been celebrated as an out woman, despite saying she does not consider herself bisexual. This weekend she explained this to Piers Morgan during an interview published  in “The Daily Mail.”