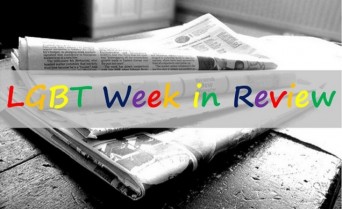 What did you miss this week in the world of LGBT news? Check out our Lesbian.com round-up and you’ll be ready to gather ’round the rainbow-colored water cooler to talk about five of the biggest, best and most interesting stories for July 20 – July 26.

Indiegogo campaign launched to bring lesbian bar back to Philadelphia

Almost exactly one year ago, the oldest lesbian bar in Philadelphia, Sisters, closed its doors leaving lesbians in the City of Brotherly Love without a place to call their own. Now Sisters’ former manager, Denise Cohen, is hoping to change that.

“Every event I run or attend, I am asked over and over, when will we get a new place?” Cohen told PhillyGayCalendar.com. “For nearly a year now I have been trying every option I could think of to make that happen and now there is a plan in place and with the help of our community, friends and family it is time to bring a new LGBT space to Philly.”

Having identified both a potential new venue and investors for the new bar, Cohen has launched an Indiegogo campaign to raise at least $50,000 of the $250,000 necessary to provide lesbians in Philly a full-time gathering place.

Details on the venue are confidential at this point, but Cohen did reveal “it will feature several bar areas, private bottle service vip room, dancing and entertainment along with an amazing kitchen to produce a fantastic menu.” She’s also optimistic about the employment opportunities the new space would open up for those in the community.

To read more about the fundraising campaign and/or make a contribution, visit Indiegogo.

“What does a 30-year-old White guy have to do with diversity? Well, the short answer — I’m gay,” says Gorrie in the intentionally humorous video.

Gorrie goes on to share his motivation for joining the force, as well as his personal experience since doing so. You can check out the full video below.

Supermodel comes out as transgender woman

Bosnian-born Super model Andreja Pejic has come out as transgender.

Pejic, formerly known as Andrej Pejic, shared the news exclusively with Entertainment Tonight, People.com and Style.com. She also worked closely with GLAAD during the week leading up to her announcement.

Pejic, who has been modeling both men’s and women’s wear since 2007, is known for her androgynous look. In an email statement received by The Huffington Post, GLAAD notes that Pejic “will only be modeling women’s clothing going forward.”

The acclaimed model has appeared on covers of Elle and French Vogue and notes that her agency has been supportive of the transition.

“As a transgender woman I hope to show that after transition (a life-saving process) one can be happy and successful in their new chapter,” Pejic said in a Facebook post.

Pejic is set to appear in Sophia Coppola’s upcoming live-action adaptation of “The Little Mermaid.”

Emily Rios, star of the RX series “The Bridge,” came out as a lesbian during an interview published Monday on AfterEllen.com.

Rios, who portrays a lesbian character on the show, told the Logo-affiliated website, “I’m gay, personally, so being Mexican and a lesbian — this is why I love the character because I deal with the same type of things with my own family,” Emily said.

Rios, 25, told AfterEllen that she’s had more support from her family than has her character on “The Bridge.” “Adrianna’s story on “The Bridge” is a little different because her mom is ashamed and embarrassed, but I dealt with that as well,” she said. “But it just took a year for ‘Hey it’s not a phase, this is really happening.’ And then they get comfortable with it. So it was a little bit more extreme, but the Mexicans are very family-oriented. It’s all about the love so they’re very supportive.”

Rios is perhaps best known for her role as recovering drug addict and mother, Andrea Cantillo, on “Breaking Bad” in which she played Jesse Pinkman’s on-again-off-again love interest.

A story surfaced this week about a July 9 incident in which an Indiana lesbian was kicked out of a Michigan water park during her bachelorette party celebration for wearing men’s swim trunks.

Jill Sweeney told a Michigan news station that she was kicked out of Muskegon’s WildWater Adventure while attempting to join her sister-in-law on the water slide. Sweeney was wearing swim trunks, a sports bra and tank top.

“I’d already been in the lazy river and the wave pool and then my sister in law went up to go down the slide. And that’s when I was stopped,” said Sweeney. “A supervisor had come up and she said, ‘Ma’am, you have to wear a women’s bathing suit. You’re not allowed to wear men’s.’”

The park’s general manager told the news station that Sweeney was in violation of park rules.

“A sports bra would not be a swim suit. We require our patrons to wear swim suits and street clothes of any kind would not be allowed,” said WildWater Adventure general manager Camille Mark.

The park denies Sweeney’s claim that she was targeted because she’s a lesbian.

When asked about Sweeney saying she felt singled out because she’s gay, Mark said, “I couldn’t possibly comment on that. How would anyone be aware of [Sweeney’s] sexuality?”

Sweeney produced a number of photos showing other park patrons who appear to be in violation of WildWater’s dress code policy and is seeking legal representation, though she said that she’s not in it for the money; she just wants an apology for the way she was treated.