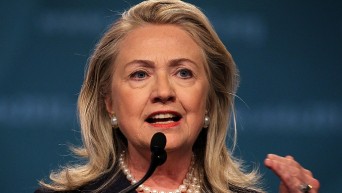 What did you miss this week in the world of LGBT news? Check out our Lesbian.com round-up and you’ll be ready to gather ’round the rainbow-colored water cooler to talk about five of the biggest, best and most interesting stories for June 8-14.

The internet was abuzz after former Secretary of State Hillary Clinton’s appearance on NPR Thursday during which “Fresh Air” host Terry Gross either badgered or persistently questioned (depending on your personal view of the exchange) regarding her evolving stance on marriage equality.

Gross appeared to imply that Clinton’s current support for same-sex marriage was a matter of political expediency. During Clinton’s 2008 campaign for the Democratic presidential nomination in 2008, she endorsed domestic partnerships, but stated her opposition for same-sex marriage. In March 2013, Clinton issued a statement announcing, “I support marriage for lesbian and gay couples. I support it personally and as a matter of policy and law.”

Listen to Clinton’s exchange with Gross below and let us know what you think — was Clinton being dodgy or was Gross’ question asked and answered? Weigh in below in the “Leave a reply” block.

Utilizing information obtained from open databases, public sites and social networks, including Craigslist, Facebook, Yelp, Rentboy, the U.S. census and the FBI crimes database, Vocativ determined which cities were the best places for LGBT people to live, work and socialize.

Perhaps surprisingly, San Francisco did not top the list of LGBT-friendly places, instead placing third behind New York City (No. 2) and Los Angeles (No.1).

To see how your city fared in Vocativ’s analysis, visit the Queer Index.

Last month, the St. Louis Rams made history when they selected Michael Sam in the NFL draft. Thursday, the team advanced that history a bit further as Sam inked a four-year, $2.65 million deal, making the former Missouri standout and SEC Co-Defensive Player of the Year the first openly gay player to be hired into a one of the four major professional sports leagues.

After the announcement, the clearly elated Sam tweeted, “Grateful, humbled, and motivated after officially signing with all my Rams rookie brothers. Let’s do this!! #RamUp”

The AP said that the position is “largely ceremonial but prestigious” and critics voiced concern that by bestowing the honor on Kutesa, and, by extension, Uganda, the U.N. was sending the wrong message regarding the country’s anit-gay legislation.

On Friday, U.S. District Judge Barbara Crabb put at least a temporary halt to same-sex marriages in Wisconsin — just one week after she struck down the state’s ban.

It was clear from the judge’s remarks that she felt constrained by the Supreme Court: “”After seeing the expressions of joy on the faces of so many newly wedded couples featured in media reports, I find it difficult to impose a stay on the event that is responsible for eliciting that emotion, even if the stay is only temporary. Same-sex couples have waited many years to receive equal treatment under the law, so it is understandable that they do not want to wait any longer,” wrote Crabb in her decision, adding, “A federal district court is required to follow the guidance provided by the Supreme Court. Because I see no way to distinguish this case from Herbert, I conclude that I must stay any injunctive relief pending appeal.”

Herbert is a Supreme Court case in which same-sex marriages in Utah were put on hold.