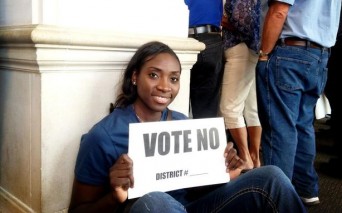 Last week, the City Council in San Antonio passed a non-discrimination ordinance that adds gender identity, sexual orientation, and veteran status to race, color, religion, national origin, sex, age and disability as characteristics that businesses cannot use to discriminate against patrons or employees. The seventh most-populous city in the United States, San Antonio has the highest percentage of gay and lesbian couples who are raising kids. The ordinance gained steam after “the Human Rights Campaign released a dismal San Antonio score on their annual Municipal Equality Index, (48 out of 100, four points behind Houston, the second-lowest ranked Texas city).” San Antonio joins other Texas cities like Austin, El Paso, Dallas, Fort Worth, and Waco with the passage of this ordinance, as well as nearly 180 other cities around the country.

Coverage of the ordinance hit sports sections when on August 28, the WNBA San Antonio Silver Stars forward, Sophia Young, tweeted “Should San Antonio be a city that allows same sex marriage?? I vote NO.” She followed up that tweet with another that included an image of her wearing blue (the color of those opposing the ordinance), holding a sign that read “VOTE NO,” while attending what looks like one of the public forums about the ordinance. Again, she mentioned same-sex marriage in her tweet, not the non-discrimination ordinance. It’s clear that Young was confused about the particulars of what she was protesting but she did take a firm, public stance against civil rights for gay people.