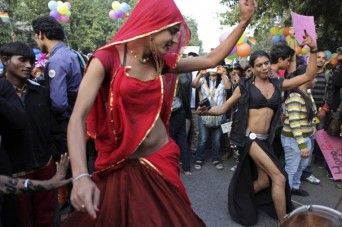 On Sunday, November 24, hundreds gathered to march through New Delhi’s streets as a symbol of pride and a call to end discrimination. It was a day of singing, rainbow flags, and balloons, culminated by a public meeting at Jantar Mantar, the capital’s main protest area. Activists could be seen happily dancing with friends and family, and several made speeches regarding the LGBT struggle in India. However, some participants covered their faces with masks and scarves to conceal their identity since LGBT acceptance is still limited in the principally conservative country.

Just four years ago in July of 2009, the Delhi High Court finally overturned India’s colonial era law (in place since 1860) criminalizing homosexuality. While still considered disreputable in many areas of the country, the LGBT community has made much improvement within the last decade. It wasn’t until 2013 that India launched its first LGBT radio station, QRadio, and the country’s first candidate for general secretary, Gourab Ghosh, called attention to campus discrimination.