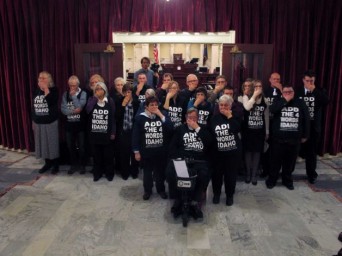 On Monday, February 3, Police arrested forty-three LGBT activists after a two-hour protest that blocked Idaho Senate Chamber entrances. According to the activists, the demonstration was meant to inspire lawmakers to include gay and transgender people in the Idaho Human Rights Act. Participants wore matching shirts bearing the words “Add the Words Idaho,” and they held their hands over their mouths in order to demonstrate their oppression.

According to police, activists stood shoulder to shoulder in a line that blocked legislators from getting through. Before she was arrested, former Senator Nicole LeFavour, who is openly lesbian and one of the organizers of the demonstration, allegedly told officers that if lawmakers “get a bill through committee, we would let them do their work.”