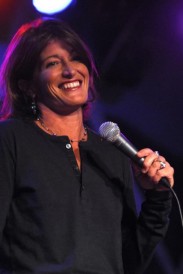 Astronaut (and Senator) John Glenn may be most famous for his quote about steps for mankind but he also said, “Too many people, when they get old, think they have to live by the calendar.” I’d like to acknowledge two phenomenal women who never look at that calendar and why we might want to be just like them when we grow up.

Reason No. 1,000,000,000 to love Cher: She turned down an offer to sing at the opening ceremony at Sochi Olympics in protest of the Russian Government’s anti gay policies. And, that’s a pretty big statement coming from someone who has a brand new CD about to drop and who doesn’t usually shy away from promotional opportunities. But, then again, Cher’s always followed the beat of a slightly different drummer. And, that beat goes on and on and on.

On May 20, Cher turned 67. Her new album, “Closer to the Truth” is coming out and it’s single, “Woman’s World” is already a big hit on the dance floor. She is reportedly readying for another tour. She is the ONLY artist to have a No. 1 song on the charts in 6 decades. Think about that. Six decades! That’s a long time to be not only current and relevant but exceptional and fantastic.

And, that’s just her musical success. She’s won not only a Grammy, but an Emmy, an Oscar and 3 Golden Globes. You have to admit that’s impressive. What is it about Cher that we just can’t get enough of? Why do we love Cher?

I’m a bit of a fan. In fact, I used to think I was Cher’s No. 1 fan until I moved to West Hollywood (Those boys win, but I’m close). I have, of course, all the albums and CDs. I have an original Cher doll, although, during one of my parties in college, somehow, Cher lost a shoe. I have boxes filled with articles I cut out about her as a kid. I have movie ticket stubs from her movie premieres (the one from “Silkwood” is framed along with the full page newspaper ad for its release), boxes of old VHS tapes with interviews, movies, commercials, anything she was in.

I’ll stop now because, at this point, I’m either losing your interest or scaring you, so let me get back to why I love Cher.

I first discovered Cher in fourth grade on the old “Sonny and Cher Comedy Hour.” For those of you too young to remember that show, here’s a sample.

Cher wore those amazing outfits by Bob Mackie. She was sexy. She was cool. And she was FUNNY. She stood there with arms folded dryly delivering zingers at Sonny with a sly smile and an attitude of confidence.

Cher was the first woman who was cool and funny. Carol Burnett was hysterical (and a genius) but she was goofy funny with crazy characters and curtain rods as part of the merriment. Phyllis Diller, Totie Fields and Joan Rivers were hilarious, but it was very much a self-deprecating humor and they certainly weren’t known as sex symbols. Cher was different. Cher was sexy and hip and cool. Cher didn’t make herself less to get a laugh. Cher’s laughs made her even more. Sorry, Mr. Springsteen, Cher was, and is, the boss. 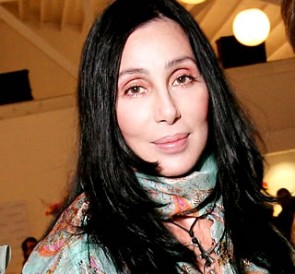 Through the years, she’s just kept bringing it. In comeback after comeback, we love to see what Cher has for us now. She took time off from music to give us some great acting performances, then she came back, jumped on a cannon barrel and “Turned Back Time.” Then more movies and an Oscar before making us “Believe.” And, all the while, doing it in her own wonderful style whether anyone else liked it or not. I don’t know about you, but I wish I cared a little less about what other people think.

Several years ago, someone asked her for advice and she said, “Don’t take ‘no’ for an answer.” For six decades, she’s not listened to naysayers. She’s not let what others think affect her actions and she’s done what she’s wanted to do. I, for one, believe she can do anything she wants. I’d be first in line to buy tickets (I’d beat the gay boys, they’d never get up early). Although, if she’s ever in charge of supplying definitions for Webster’s Dictionary, she should probably let someone else handle the entry on “farewell.”

Cher is not the only amazing lady to emulate. A few weeks ago, Diana Nyad was responsible for a great many pulled muscles. If you’re unfamiliar with Diana, she’s the marathon swimmer who this past Labor Day swam over 53 hours from Cuba to Key West Florida. Nonstop. Without a wet suit or fins or stopping or hanging on to the boat, stroke after stroke after stroke for what ended up being 110 miles. SHE didn’t pull any muscles. She made the swim just fine. We pulled the muscles as we ran that extra mile, did one more set of weights, as we thought, “Hell, if a 64-year-old can swim all the way from Cuba, I can do one more … Ouch! Ahhhh, crap! Somebody get me some ice.”

They said she was crazy to try this again after having almost died in her previous attempts. On August 31, 2013, at 8:59:02am, Diana Nyad jumped into the water in Havana, Cuba, and 52 hours 54 minutes 18.6 seconds and 110.4 miles later, she walked onto the shore of Smathers Beach in Key West, Florida. Through sunburned and swollen lips, she bade us, “Never, ever, give up!” and “You’re never too old to chase your dreams” before collapsing into the arms of her handler. She does put up a convincing argument. 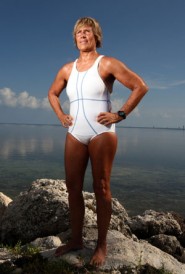 Briefly, for those that aren’t familiar with this story (and, if you are, you may now skip ahead to the next paragraph), this was not Diana’s first attempt. It was the fifth. One attempt came in 1978 when bad weather and giant swells threw her too far off course to complete the swim. The following year, she made a swim of equal distance from the Bahamas to Florida, but it wasn’t “The Cuba Swim” of her dreams. And, really? Who hasn’t done the North Bimini to Cuba Swim? Please. Actually, no one. At that time, it set the record for longest swim in open waters without a shark cage. Nyad quit swimming for 30 years when, at 60, she decided to go for that dream one more time. She began training again, in secret at first, then, when she felt certain she could do it, she told her friends and assembled a team. She tried the swim from Cuba to Key West again twice in 2011 and once more in 2012. Bad weather currents, storms, asthma attacks and deadly jellyfish stings derailed these three attempts. This was it. This final shot, make it or not, she promised, this would be the last swim. OK, now you’re caught up.

So, my friends, I hope you appreciate what these two amazing sexagenarians have done. One has given us a lifelong lesson in being who you are never letting people tell you ‘no.’ The other has shown that, at any point in life, you can still fulfill your dreams, if you go for it. They’ve kinda made it impossible for us to have excuses.

“I couldn’t possibly go back and get that degree.” Oh, really? Are there sharks chasing you?

Jennie McNulty was named one of Curve magazine’s Top 10 lesbian comedians and is a featured Sweet performer. She can be heard weekly as co-host of LA Talk Radio‘s “Cathy Is In: The Cathy DeBuono Show.”