Ten years ago, when I decided to stop meeting women over the internet and to stop falling in love with straight girls, I began attending lesbian dances. I attended these dance events throughout greater Boston and up into Southern New Hampshire and Maine. Dances became my new preferred method of finding lovers, and I unearthed a slew of them in my forties. When I use the term “lesbian dance,” many people, gay women included, don’t know what I mean.

“Oh, you mean a gay club?” someone inevitably asks.

“No, the club scene is different.” Her eyes look quizzical and confused. 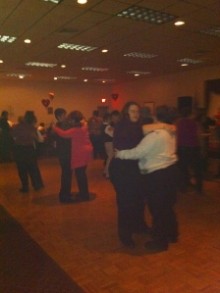 At clubs, I explain, the women arrive in cliques and the drunkenness they develop seems to be the goal for the evening, a way to forget their sorrows or ignore their emotional baggage. Also, at clubs, everyone is twenty-something, or appears to be. I don’t like going to a club where I am biologically qualified to be everyone’s mama.

“No one talks to me at clubs,” I say to those who ask and to some who don’t, “but at the dances, I get a lot of attention and I like that.” Many years ago, an attractive black woman called me “Ms. Thang.” I didn’t realize at the time she thought I was a jerk, strutting my stuff in my tank top and tight jeans (ripped muscles, nice ass.) I liked the idea of being a “Ms. Thang.” I’d never been anything like that in my life, until I entered my forties and discovered these dances.

The women are open, open to discussion, to socializing, to dancing, and to meeting one another. They don’t get quite as drunk as they do at clubs, and some of them don’t drink at all. Plus, the music doesn’t suck; no one is making a house mix out of a classic Stevie Wonder song. You really don’t need to do anything to “Superstition” or “Sign, Sealed and Delivered” to make it a great dance tune. 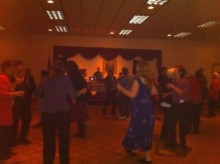 These ladies do it old school.

The lesbian dance is an old event. Here are a couple of interesting factoids I found on the web:

“Our first dance “Top o’ the Town” took place in 1981 at the Shriner’s Hall in Tacoma. This was one of the first lesbian dances EVER in the South Puget Sound area. We had over 300 womyn show up and were overwhelmed with the response.”

“Folks from that era who went regularly to the bars loved them and were loyal to them, but it was a bittersweet love. “The bars are the only place for Gay people to go to get together outside of home,” one of them wrote. And then, in the next line: “There is no question that they were for shit.” No wonder that, when gay liberation groups started forming at the end of 1969, the creation of new gay and lesbian spaces— and opening up those spaces for same-sex dancing— would be high on the list of priorities.”

I hadn’t been to such a dance in a few years, having had my fill of them and enough lovers in the last 10 years to make my romantic resume read like “short-term, temporary positions only,” i.,e., commitment phobic and slutty – or misunderstood, if you want to be kind to me. Maybe I’ve lost my need for such dances, because I’ve gotten myself out of the house traveling and living in the world, after years of being fully or partially agoraphobic. These days, I seem to meet women in my everyday activities. I like that — that women I find attractive and who find me so, just happen along in my tracks. I don’t have to seek out lesbians at a dance, but you know, I have a great deal of respect for such events. In Boston, we have several such dances sponsored by various groups: Women Meeting Women, Ova40, and The Mass Breast Cancer Coalition, to name a few. 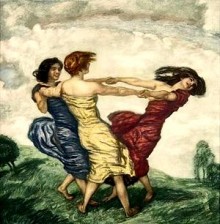 I did not meet these ladies at the dance. But if you know where they hang out, be in touch.

I decided to venture to a dance recently. I’m not sure why after all this time. I’m single. I guess there is always that hope that you’ll me the woman of your dreams if you just give it one more try. I did not find the love of my life at the event. It was an over 40 dance, but for the most part, it looked like an over 60 dance. I am not poking fun at the women who attended, just acknowledging the awkward age I’m at where women my age seem too old, and the women I find attractive seem too young.

I’m posting a short video to show how cornball this dance scene is, at least these dances for middle-aged lesbians, and yet, how amazing it all is – because if you want , you can find a place to be with a bunch of aging lesbians, out of shape, overweight, graying, and quite fabulous. Think of all they’ve survived — prejudice, homophobia, illness, ostracism, and here they are dancing, celebrating together. Many of them are amazing dancers, old school mind you, because of their age, and because they take lessons. It’s okay to laugh. I don’t think they would mind, because they are good with themselves.

Ladies, I tip my hat to you.

2 Responses to “Lesbians live and dancing”