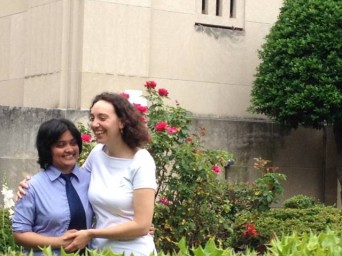 A crowd of more than 200 mostly Latino teenagers and young adults cheered at a Capitol Hill church on Tuesday as a lesbian bi-national couple exchanged marriage vows at an annual event organized to promote passage of immigration reform legislation pending in Congress.

The decision by organizers of the 2013 Annual DREAM Act Graduation Ceremony to include a same-sex wedding as part of the event held at the Lutheran Church of the Reformation was viewed by activists as a sign of solidarity between the LGBT community and the U.S. immigration reform movement.

“We are working for the rights of all Americans, and whether you are straight or gay or bisexual or whatever your national origin or religion, our country draws its strength from our diversity,” gay U.S. Rep. Jared Polis (D-Colo.) told the gathering.