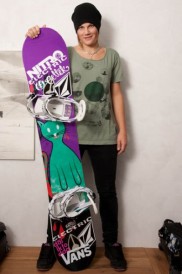 On February 6, Dutch snowboarder Cheryl Maas became the first Olympic athlete to make a (silent) stand on LGBT rights during the actual Games. Maas, a lesbian herself, is married to Norwegian former snowboarder Stine Brun Kjeldaas; the two have a daughter together.

At the kickoff for the 2014 Winter Olympics, during the inaugural slopestyle event, Maas flubbed her second run, meaning she will have to compete again on February 8’s semi-finals to qualify for the finals.

As she walked away to wait for the judges to announce her score, the news cameras focused on her, and she held up a gloved hand—decorated with a rainbow and a unicorn.