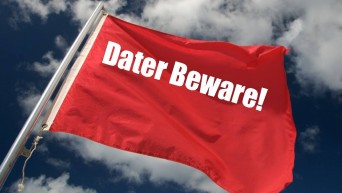 Let’s face it — it can be a rough go out there in the lesbian dating world. So it’s no wonder that when we happen on someone who seems nice and we find attractive, we rush headlong into a relationship. Often we do this despite the bright red “Dater Beware” signs blinking in front of us.

In order to save you a bit of time, trouble and tragedy, we’ve put together this list of five relationship red flags of which to be wary.

They say that people often tell us who they are right from the start. We just don’t always pay attention.

Over time I learned that, at least in her case, “bad at relationships” meant selfish, inflexible and unable to communicate openly. If our relationship had a tagline it would have read: Her way or the highway.

Sure, compromise has its place in every relationship, but when concession is a one-way street you soon find yourself tendering a taxing toll.

Red flags: Rarely/never compromises on activity choices; expects you to always come to her; uses anger to shut down sensitive discussions.

DRAMA IS AS DRAMA DOES

Does your new love interest always seem to be embroiled in some sort of crisis? She isn’t speaking to her family, every conversation involves the latest rumor circulating amongst her friends and she was just put on a Performance Improvement Plan at work because she can’t seem to get along with co-workers.

Danger, Will Robinson! Unless you’re looking to earn a “Best Supporting Role” award in this drama queen’s ongoing production, exit stage right. If you don’t want to spend the rest of your life (or even just the rest of the week) entangled in petty squabbles, this is not the woman for you.

Red flags: Few/no friends; has left/been let go from more than one job due to “personality conflicts;” subtly (or not-so-subtly) picks at your friends; frequent disagreements/arguments in the very early stages of the relationship.

While I would never encourage anyone to be disingenuous when getting to know someone new, there’s a definite line between honesty and overload. And if your potential partner immediately becomes a veritable Old Faithful of private information, you may want to slowly back away from the hazard.

For instance, let’s say you ask about your new prospect’s family. It’s perfectly okay for her to say, “I’m not really that close to my family,” if that’s the case. However, if she shares the full details of every little family feud — including accusations of infidelity, addiction and/or abuse — she’s in violation of first-few-dates protocol.

Yes, her honesty may be admirable, but if she’s willing to share such sensitive information with a complete stranger at the outset she very well may have boundary issues. And clear boundaries are essential to good relationships. So you do the math on this one.

If you decide to stay the course with this potential shape-shifter, go ahead and put a copy of “Co-Dependent No More” on your Amazon Wish List.

Red flags: Shares intimate details of her life extremely early in the relationship; demonstrates overly clingy behavior; begins giving up her own friends, interests, etc., to adapt to yours; uses manipulation to get what she wants; extreme jealousy.

Chances are if you’re over the age of 16 you have an ex. Chances are this will also be true of anyone you date. And during the course of getting to know one another past relationships are bound to come up in the conversation.

However, if your new girlfriend peppers every discussion with, “Oh, that reminds me of the time my ex …” or frequently insists on changing the radio station because “that song reminds me of my ex” or, even worse, tears up when discussing her ex, you may have caught her just a wee bit too early in the healing process.

Unfortunately, some people just don’t know how to be alone for very long. As a result, they bounce from one relationship directly into another, often before the emotional storm from the prior connection has calmed.

If your intent is to act as the emotional equivalent of FEMA, providing post-disaster comfort and relief, then by all means mobilize to the scene. But if you’re looking for something a little more long-term, you may find that it’s not much fun being Ms. Right Now rather than Ms. Right.

Red flags: Appears overly emotional when discussing the ex; habitually discusses the ex, tying in references to her in numerous situations; makes comparisons between you and the ex.

“MISTER, CAN YOU SPARE A DIME?”

As a hopeless romantic with my own less than impressive relationship with money, I’d be the last one to suggest that someone’s bank account serve as a litmus test for love. That said, no one really wants to be taken advantage of financially, right? And assuming the role of fiscal authority figure in the relationship isn’t exactly a turn on either. So to avoid the grasp of gold-diggers or becoming parent to a fiscal infant, be keen to early money-related warning signs.

Of course, things won’t always be 50/50; there may be a significant income gap between you and your possible partner which renders it impossible for her to return the favor of lavish dinners out. But if she’s all “take” with no “give” or swiftly shifts from appreciative to expectant of your generosity, you may start to feel more like an ATM than a girlfriend.

No, she doesn’t need to match you dollar for dollar, but your picking up the dinner tab can be reciprocated by her shelling out for Starbucks sometime. Your lavish flower delivery can be countered by an equally thoughtful but far less expensive gesture.

Quite simply, when it comes to money matters trust your gut. If it feels like it’s too early for her to be asking you for a loan, it probably is. And if you feel like you’re being used, you probably are.

Red flags: Moves from one financial crisis into another; never offers to pick up the tab; “forgets” her purse/wallet on more than one occasion; asks to borrow money very early in the relationship; hints that it’d make good financial sense for her to move in right away.