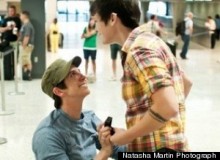 She was waiting patiently at the airport for her girlfriend to return home from Afghanistan, but little did she know, the homecoming would be even more memorable than she could have imagined. When her girlfriend walked through the gates after a 14-hour flight from Dubai, she had a ring in her pocket.

The story of this couple, whose identities are as of yet unknown, began going viral when one posted their engagement photos on Reddit.