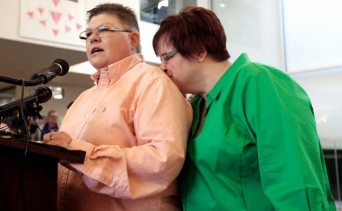 The Associated Press reports that a lesbian couple were the first to wed this morning one day after a federal judge struck down the state’s 10-year ban on same-sex marriage.

“I figured in my lifetime it would happen,” Caspar said. “But now, when it happens now, it’s just overwhelming. I still can’t believe it. I don’t think it’s hit me yet.”

DeJong called it a day of “sheer joy” adding that Michigan should not “waste taxpayer dollars and cause more turmoil” by pursuing a stay on the ruling as Attorney General Bill Schuette did immediately after Friday’s ruling.

In overturning the state ban, Judge Bernard A. Friedman of Federal District Court wrote, ““The guarantee of equal protection must prevail.” The ban on same-sex marriage had been in effect since 2004 when it was approved by voters in a landslide decision.

Michigan attorney general, Bill Schuette, filed notice that the state would make an emergency request to the United States Court of Appeals for the Sixth Circuit, in Cincinnati, asking the panel to stay the ruling and reconsider it.

Michigan is the 18th state in the nation to allow gay marriage. At least three counties plan to issue licenses on Saturday. Others intend to follow suit on Monday.

UPDATE: According to reports in The Detroit News late Saturday, The U.S. Appeals Court for the Sixth Circuit has issued a temporary stay on Michigan’s gay marriage case until Wednesday.

“To allow a more reasoned consideration of the motion to stay, it is ordered that the district court’s judgment is temporarily stayed until Wednesday,” the order read.