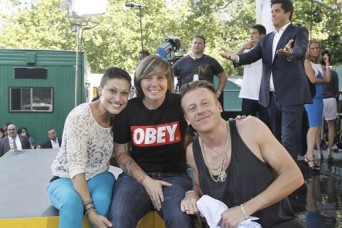 “Good Morning America’s” Summer Concert Series lands some of the biggest pop stars in the game like Mariah Carey, Carly Rae Jepsen, and the latest addition to the series, Macklemore & Ryan Lewis. The beloved rap star and his producing partner performed their hits, including “Thrift Shop” and “Same Love,” live on the nation’s number one morning news program on August 16. But what made this concert especially memorable wasn’t the thousands of fans watching Macklemore in Central Park — it was the surprise marriage proposal that occurred during one of the commercial breaks.

Val Dallas and Kara Toomey, a lesbian couple, attended the concert with a rainbow sign that read: “Same Love: 1 Year Anniversary.” During the show, Dallas, who was standing behind her, changed the sign to read “Can I propose to my girlfriend on stage?” Toomey didn’t know Dallas had changed the sign and soon the couple was called up onstage.